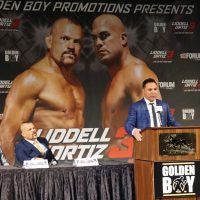 Chuck Liddell and Tito Ortiz will have their third fight under the new Golden Boy MMA Promotions.

The trilogy takes place on November 24 at The Forum in Inglewood, CA.

Liddell defeated Ortiz in their first two fights back in 2004 and 2006.

On September 14, they had their official press conference at MGM Grand.