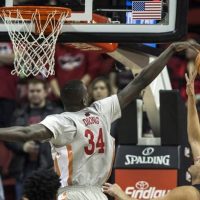 When Marvin Menzies was fired, UNLV was in danger of suffering from another mass exodus of players. But T.J. Otzelberger has managed to keep the roster intact by re-recruiting last season’s Runnin’ Rebels.

While Otzelberger’s scheme is not an ideal fit for Diong, the 6-foot-11 big man will likely be the starting center for the Rebels in 2019-20.

As a sophomore last season, Diong started 21 of the 26 games he appeared in and averaged 6.9 points and 6.9 rebounds. His biggest contributions will likely come on the defensive end, where his 1.5 blocks per game ranked third best in the Mountain West.

The Rebels have two scholarships left with Diong’s return. Two transfer targets that could eat up those two spots are visiting this weekend in David Jenkins and Elijah Mitrou-Long.