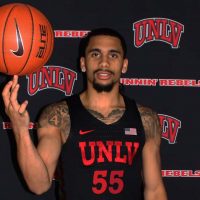 T.J. Otzelberger has added another guard to his roster, as Elijah Mitrou-Long announced on Twitter that he is coming to UNLV.

Mitrou-Long will be eligible immediately as a graduate transfer, giving the Rebels an instant boost in the backcourt.

This will be the 6-foot-1 guard’s third different school. He began his career at Mount St. Mary’s, where he was teammates with current Runnin’ Rebel, Jonah Antonio. In two seasons with the Mountaineers, Mitrou-Long averaged 5.6 points and then 15 points per game.

Then he transferred to Texas. After sitting out a season, Mitrou-Long scored 5.6 points per game for the Longhorns. He made nine starts and averaged 17.9 minutes per game.

Mitrou-Long will give the Rebels another ball handler, to help take the load off of Amauri Hardy’s shoulders. In his sophomore year at Mount St. Mary’s, Mitrou-Long led the team in assists with 4.4 per game.

He should also fit into Otzelberger’s desire for shooting, as his career three-point percentage is 35.1.

Mitrou-Long was on a visit to UNLV over the weekend with David Jenkins, T.J. Otzelberger’s former player at South Dakota State. Jenkins is expected to announce his decision later this week.

With Mitrou-Long on board, the Rebels are down to one available scholarship.