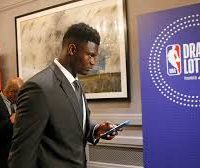 The Zion Wiliamson sweepstakes was held Monday night and the NBA got what it wanted with a drama filled Draft.Lottery.  Changing it’s format to create excitement for a 30 minute pregame show prior to the Warriors – Blazers game and trying to halt bottom feeder teams from tanking late in the season, the NBA wanted to make the odds a little more even for non-playoff qualifying teams with a chance at the top overall pick.

​The New Orleans Pelicans won the right to select the Duke big man despite having only an 11% chance.  The New York Knicks and Phoenix Suns had the best opportunity at 14% with the poorest records but came up with 3rd and 6th pick respectively.  The Suns were the biggest losers, having the second worst record and only receiving the sixth selection in the June draft.

​It’s a shame that the NBA cant be like the NFL or Major League Baseball and reward the teams who truly stink.  That’s why the draft order was in place from the beginning of time.  Create a level playing surface and attempt to give the league competitive balance.  By making a separate TV show that more resembles a game show while not rewarding the team with the worst record, the league will continue to be scrutinized.