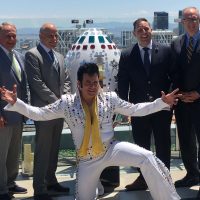 Beginning in 2020, the Las Vegas Bowl will be played in the new, Las Vegas Stadium and will showcase a team from the Pac-12 Conference against teams from a rotation of the SEC and Big Ten Conferences, in a six year deal, beginning in 2020.

“We are pleased to add the Las Vegas Bowl to the SEC Bowl Lineup,” SEC Commissioner Greg Sankey stated.  “We enjoy great relationships with some of the best bowl games in College Football.  With the addition of the Las Vegas Bowl, the SEC provides a new destination for our students and fans and in a much-anticipated match up with a Pac-12 Conference opponent.”   That statement was also shared by Pac-12 Commissioner Larry Scott who noted this game will provide for the first time ever, they will have a scheduled bowl game with the SEC.

For years, the Las Vegas Bowl was played at Sam Boyd Stadium and now it moves to the $1.8 Billion Las Vegas Stadium that will offer around 65,000 seats and 128 suites.