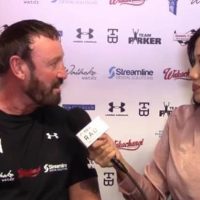 Parker is coming off a third-round KO victory over Alexander Hernandez in December.

At his gym in Las Vegas, Parker’s head coach, Kevin Barry, spoke to Helen Yee about his upcoming fight and Andy Ruiz vs Anthony Joshua.

He also discussed an interest in a rematch for Parker against Dillian Whyte afterwards, and more.