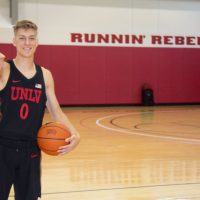 T.J. Otzelberger landed his second commitment in the the 2020 recruiting class, as Isaac Lindsey pledged his services to UNLV.

Lindsey is a 6-foot-3 guard out of Mineral Point, Wisconsin. He is an unranked recruit by 247 Sports, but had offers from DePaul, Green Bay and Milwaukee.

Otzelberger had recruited Lindsey to South Dakota State prior to leaving the Jackrabbits for UNLV. He is now bringing the three-point shooting guard to Las Vegas.

After taking the job in March, Otzelberger did not land a high school recruit for the 2019 class. He now has two in the 2020 class, as Lindsey joins Nick Blake.

Otzelberger has referred to the 2020 class as the foundation of the program, indicating these players will be critical to UNLV climbing to the top of the Mountain West.

With Blake and Lindsey incoming, Otzelberger is placing an emphasis on the backcourt. The Rebels are expected to be highlighted by Amauri Hardy and David Jenkins in 2020-21.

Ozelberger will have Bryce Hamilton, Jonah Antonio, Nick Blake and Isaac Lindsey as back court options beyond his top two in 2020-21.