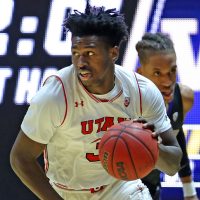 Donnie Tillman will transfer from Utah to UNLV and be eligible right away, according to the Review Journal.

Tillman is a 6-foot-7 forward that averaged 10.6 points per game in 27.3 minutes per game at Utah last season and has two years of eligibility remaining.

In June, Tillman announced he was taking a leave of absence to be closer to his mother, who deals with epilepsy according to the Salt Lake Tribune.

That visit seems to have made the difference for Tillman, as he will now play for the Runnin’ Rebels in T.J. Otzelberger’s first season.

With a career 35 percent mark from three-point range, Tillman slots in as a stretch four. He will likely be the second best player on the team this season with Amauri Hardy.

But in 2020-21, he will form a trio with Hardy and David Jenkins that will contend for the Mountain West title.