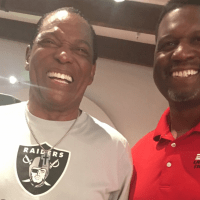 It was a somber Family Day at Raiders camp as the team’s families were joined together in the remembrance of legendary wide receiver Cliff Branch, who died on Saturday.  In addition to several players and coaches wearing Branch’s #21 jersey in practice to the special film session that featured the storied career of the 3-Time Super Bowl Champion.

“Big family day that we are excited about. I’d like to just acknowledge that we are going to miss Cliff Branch. It was a terrible loss to the Raiders and to football and to everybody that knew him. A bunch of our players paid tribute to him today and our prayers are with him and his family, so that’s a big loss for us.  When you are on an NFL team you can draw from the past and help you in the future, and sometimes you can use these guys. Just respect the players that came before you.”

14 years in the league, all with the Raiders.  On a franchise full of legends, Cliff Branch is the only Raiders player in team history that was on each of the team’s Super Bowl winning teams.  It goes on:

Former NFL WR and fellow, former CU Buff, Mike Pritchard joined The Press Box and remarked on how Branch’s career both on and off the field, impacted everyone he touched

Catch The Press Box Morning Show, 7a to 10a, Monday through Friday on ESPN Las Vegas.