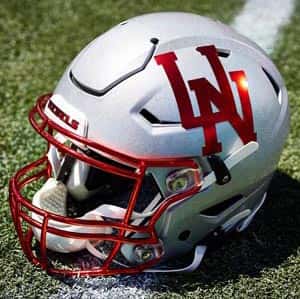 UNLV will celebrate their final season at Sam Boyd Stadium with a throwback to their first season in what was originally called Las Vegas Stadium.

The Rebels will wear throwback helmets based on the 1971 helmets UNLV wore when they broke in Las Vegas Stadium.

The 2019 campaign will be the final time the Rebels play at Sam Boyd Stadium before moving into Allegiant Stadium, the new stadium being built near the Las Vegas Strip for the Raiders and Rebels.

The helmet features an interlocking UN decal that was designed by Bill Ireland, the first UNLV football coach. UNLV wore the helmets from 1969-1972.

The last time UNLV wore throwback helmets was in 2017 when they donned a Rebels woodmark decal reminiscent of the helmets worn from 1982-1986.

UNLV lost to FCS Howard 43-40 in those throwbacks.

The helmets will not be the only way UNLV honors Sam Boyd Stadium. Each home game UNLV will honor a different decade of Rebel football and give away themed t-shirts based on each decade.

Aug. 31, vs. Southern Utah — Celebration of the 1970s/Home Opener/Throwback Helmet

Sept. 7, vs. Arkansas State — Celebration of the 1980s/Kids Night/Extra Yard for Teachers

Nov. 16, vs. Hawai’i — Celebration of the 2010s/Homecoming/Red Effect/Ninth Island Showdown