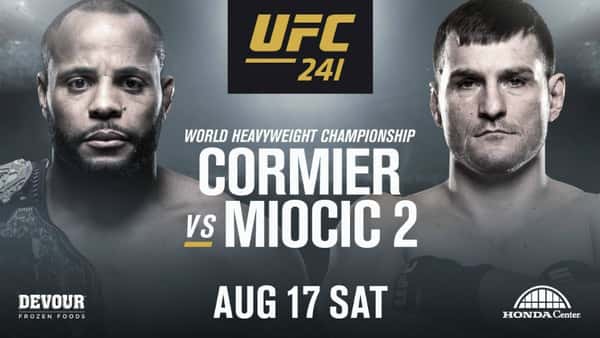 While there were so many memorable moments throughout the night, here are my Top 3 Moments (counting down 3-1):

This nonstop action packed “Fight of the Night” winner, and now a candidate for fight of the year, exceeded expectations which were already high. It earned a standing ovation and though some had conflicting decisions on who they thought the winner was in the razor thin fight, Paulo Costa powered his way to a unanimous decision victory and an undefeated 13-0 record.

Yoel seriously tried (and may have succeeded) to distract a rampaging Costa hunting a KO off a KD with a "look over there" point. Romero is a treasure. #UFC241 pic.twitter.com/pNQDc6gcpy

2. The successful return of Nate Diaz, and calling out Jorge Masvidal

After being away from the octagon for nearly three years, Nate Diaz made his anticipated return in front of a sold-out arena chanting for him. He looked so sharp in the octagon against a tough Anthony Pettis which earned him a unanimous decision victory. Afterwards, he called out Jorge Masvidal.

Nate Diaz is back and he wants Jorge Masvidal next. #UFC241 pic.twitter.com/6vyLoyFsp3

1. Stipe Miocic wins his belt back

Since being defeated on July 7, 2018, by a future UFC Hall of Famer, Daniel Cormier, Stipe Miocic was hungry for a rematch to avenge that loss and reclaim his UFC heavyweight title. Though Miocic was out of the octagon for a year, it was life-changing for him; he became a father for the first time. When asked about his daughter Meelah during media day, his face lit up as he smiled ear to ear.

In the fight, Miocic was facing adversity early on in the first few rounds; however, he made the right adjustments in the fourth round by attacking Daniel Cormier’s body, then head, which crumbled Cormier, and not only earned Miocic the TKO victory, but added to his legacy.

Those were my Top 3 Moments, what are yours? -Helen Yee