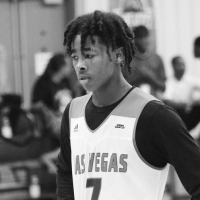 T.J. Otzelberger is looking far into the future despite being the head coach at UNLV for less than six months.

Keshon Gilbert pledged to UNLV today, according to his AAU team.

But Gilbert continues the local trend for Otzelberger in recruiting, as he comes from the Las Vegas Knicks and Durango High School. Otzelberger landed three players with ties to Las Vegas for his 2020 class in Jhaylon Martinez, Nick Blake and Donavan Yap.