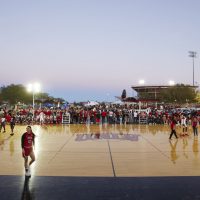 Runnin’ Rebels Head Basketball Coach TJ Otzelberger appeared on The Press Box Morning Show and discussed Saturday’s unique event at Sam Boyd Stadium, in which, a basketball court will be laid down next to the Rebel Block Party before the Rebel Football game – to introduce fans to this season’s Men’s Team and Lady Rebels.

In a career that spans many years, including several with Iowa State, Coach Otzelberger remarked on how Cyclones fans relished the opening showcase and it can be something just as special for Runnin’ Rebel fans, as well, “We had a lot of shooting contests, dunk contests, fan interaction, autographs – the energy was great and we want to generate that same excitement and energy leading into the season and this Saturday will be a good first step towards that.”

In addition, Coach Otzelberger opened up about how his passion for UNLV Basketball began as a child in Milwaukee, watching the Rebels on ESPN’s Big Monday, as well as, his philosophy on recruiting and stockpiling commits for 2020.

Saturday’s Scarlet And Gray Showcase at Sam Boyd Stadium is FREE to Attend and begins at 6pm, get there early for seats!   Meet both The Runnin’ and Lady Rebels, along with Coach Otzelberger and Kathy Olivier.  Chance to win $10,000!!!  One lucky fan will have a chance to hit a half court shot  and Autographs are available at the end, while Free Parking is available in the unpaved lots.

Basketball season tickets are on sale now and may be purchased at UNLVtickets.com, by calling 702-739-FANS (3267) or at the Thomas & Mack Center Box Office.

The Runnin’ Rebels will host West Coast Baptist College in an exhibition game at the Thomas & Mack Center on Friday, October 25, before facing Purdue Fort Wayne to open the regular season on Tuesday, November 5. The Lady Rebels, who will not play an exhibition game, open their season at the Thomas & Mack Center on Saturday, November 9 prior to the Runnin’ Rebels hosting Kansas State.