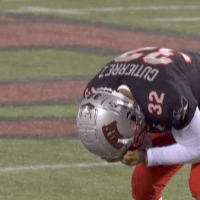 The Rebels had a chance to tie the game and set up overtime, but Daniel Gutierrez’s 43-yard field goal drilled the upright, sending UNLV to a 20-17 loss against San Diego State.

The Rebels got a third down stop to give the offense a chance to tie the game.

After a 14 yard loss on a bad snap, UNLV faced a 4th and 24. Kenyon Obad delivered a perfect pass to Randall Grimes down the sideline to get the first down and help get the Rebels into field goal range.

But on 4th down, the kick would not curve in for the Rebels.

That ended UNLV’s chance at an upset victory and turned the focus to the Rebels other miscues, which included.

-A blocked punt for an Aztec touchdown

Overall UNLV had a terrific night, with Charles Williams topping 115 rushing yards and Oblad throwing for 255 more. And the defense only surrendered one touchdown.

But a handful of mistakes cost UNLV an upset win.