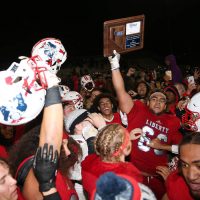 In a stunning comeback, Liberty finally found the magic it needed to defeat longtime rival, Bishop Gorman in Overtime, 30-24 to propel themselves out of the Desert Region Championship game.  Down 17-3 at the half, the Patriots scored twice in the third quarter and used their stifling defense to push the game to extra time and rode the energy of Running Back Zyrus Fiaseu for the game-winning touchdown.

It’s been a wild year for Liberty, known as a regional power found themselves at 0-5 to begin the season but rallied back behind Head Coach Rich Muraco, who appeared on The Press Box Morning Show with Clay Baker and Rob Miech, explained how the team reacted once that final whistle blew.

“It was pure bedlam.  The whole school, everybody in the stands, all the families – everyone rushed the field.  Players crying, coaches crying, it was craziness.  It was pure joy and a moment I’ll never forget.”

Liberty will now head to Reno for the Nevada State Semi-Finals and last Friday’s win stopped a ten-year Nevada State Title streak for Bishop Gorman, who had not lost to a Nevada school since Nov. 21, 2008.