The fourth-seeded Rebels took a loss to No.5 Boise State in the Mountain West Tournament quarterfinals with a final score of 67-61.

The first half was slow going and defensively driven, as UNLV shot under 30 percent from the field and went 4-14 from behind the three.

The All-Mountain West First Team forward, Bryce Hamilton, and Amauri Hardy led the team in scoring with eight points each at the end of the half.

Hardy drilled a late three at the buzzer to send the crowd roaring as both teams headed into the locker room. 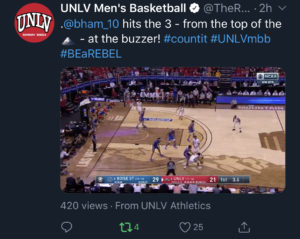 The beginning of the second half seemed to be lack-luster as well, with no points scored and four turnovers within nearly a five-minute stretch.

However, the Runnin’ Rebels kept fighting as Jonah Antonio had two short runs and the team closed the game to a two-point gap.

In the end, it was the Broncos who walked away with the win and the Rebels rounded out their season with a 17-15 record.

Boise State will continue on to the semifinals. Their next game will be Friday night at 6 p.m. against  San Diego State.