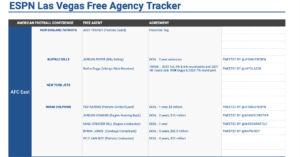 Arizona locks him up:

The Chargers bolt up:

#Broncos free agent CB Chris Harris, one of the top players still available, is headed to the #Chargers, sources say. A big-ticket defender for Los Angeles.

Look who is going to Washington:

Former Steelers’ safety Sean Davis will sign with the Redskins on a one-year deal worth up to $5 million, per @RosenhausSports

An Apple in the desert:

Ted Karras to Miami on a one-year, $4-million deal, per source. Another Patriots connection.

The Bucs get Brady:

BREAKING: Tom Brady has an agreement in principle to join the Buccaneers. The deal is roughly $30M per year. (via @Rapsheet) pic.twitter.com/sW217u2PvF

Teddy heading to The Big Easy:

Sean Lee back to #Cowboys at 1 year, $4.5 million with $2 million fully guaranteed

LB Thomas Davis announces he is signing with the Redskins. pic.twitter.com/tf4n2XIYXW

Safety Jeff Heath is the third Cowboy to move on to the Las Vegas Raiders today, joining Jason Witten and Maliek Collins. According to a source, he agreed to a two-year deal that can be worth as much as $8 million, according to a source. Heath started… https://t.co/7fRniyzuUx

The Giants look to get bigger:

The Bills lock up Poyer:

The Bills have reached a two-year extension with safety Jordan Poyer, locking up one of their defensive leaders through 2022, according to a source.

The Bengals don’t bungle this one:

Well-deserved payday for @Djread98 one of the best defensive linemen in the NFL and now the highest paid nose tackle in the NFL at $53 million. Cincinnati Bengals beat out the Denver Broncos and others for his services. Outstanding contract

A veritable MNF booth in Vegas.

The Panthers get a new signal caller:

The Panthers and Teddy Bridgewater are negotiating a 3-year contract in the $60 million range, per source. The deal is not done as they work out details but it is expected to be complete when new league year opens Wednesday.

The Dolphins keep on signing players:

Dolphins and former Eagles' RB Jordan Howard reached agreement on a two-year deal worth north of $10 million, per source.

Titans add to their defense:

Former Falcons’ pass rusher Vic Beasley will sign with the Titans, per his agency. The 27 year old led the league in sacks in 2016 when he was in Atlanta.

From the frozen tundra to LA:

Taking all his kids to Indy:

Getting close to a deal:

The #Dolphins are closing in on a deal for #Eagles RB Jordan Howard, source said. He averaged 4.4 yards per carry last year and flashed when healthy.

The Dolphins add to their defense:

The 49ers are bringing back Ronald Blair on 1 year deal:

The #49ers are bringing back defensive end Ronald Blair on a 1-year deal, source said. He had three sacks last year.

UPDATE: According to Cam Newton’s comment on Instagram, it’s the team that is pushing for his trade, not Newton.

Breaking: Cam Newton says he never asked for a trade from the #Panthers, it came from the team. pic.twitter.com/Ium6IjIpew

One of the biggest dominoes in the NFL offseason has fallen:

Breaking: Tom Brady announces he will leave the Patriots via his Instagram

“I don’t know what my football future holds, but it is time for me to open a new stage for my life and career” pic.twitter.com/ibilZIsqIl

In other NFL free agency news:

Cam Newton may be on the move:

Panthers and Cam Newton are working together to seek a trade, per source.

The Saints lock up Drew Brees:

Josh Allen gets another target:

Bills have acquired @stefondiggs in a trade from the Vikings. @NFLonFOX

Jimmy Graham to the Bears on a two-year, $16 million deal, including $9 million guaranteed, per source.

Source: The #Dolphins are getting #Cowboys FA CB Byron Jones. A massive deal for the now highest-paid corner.

While the world of sports and fans sit in suspense for an eager return to play, the NFL moves forward with stunning trade decisions.

In the midst of trades, the NFL released a memo to all teams, updating rules for free-agency while also postponing off-season training.

In a memo to teams, the NFL has implemented new rules for free agency and postponed the off-season training activities indefinitely, in a memo obtained by ESPN. pic.twitter.com/gFkSErJBa4

The NFL free agency opened on March 16 with an abrupt trade of talent between the Cardinals and Texans.

Houston traded off key play-maker and franchise icon, DeAndre Hopkins(WR) , in exchange for Arizona’s David Johnson(RB) and a second-round pick for 2020.

Get ready Arizona, @DeAndreHopkins is on the way!

Arizona's offense could be scary next season ???? pic.twitter.com/PZ5rMDgR8N

The Texans also made a deal to keep Bradley Roby(CB) as he returns from his 2019 hamstring injury for another three years in Houston at $36 million.

The Colts made a trade with the 49ers exchanging their first-round pick for DeForest Buckner(DT). The All-Pro player agreed to a contract salary of $21 million a year, making him the second-highest paid DT in the NFL’s history.

Talks of Tom Brady’s free agency has circled for months now. As teams bow out, three franchises remain a consideration according to Ian Rapoport of the NFL Network.

The Chargers, Buccaneers and Patriots are now in proper talks with Brady(QB) and his agent Don Yee, however, time will soon tell if there are other contenders still at play.

McCourty has proven his worth to the Pats over the last decade and re-signed with the team with a two year, $23 million agreement.

A year and a half ago, Flowers was cut from the New York Giants and was considered a total bust for the 2020 trade.

Now, he’s negotiated a three year, $30 million contract with Miami. The Dolphins came into the draft with the largest salary cap to work with and now they’re banking on Flowers to deliver.

The Dolphins are spending huge in day one in order to get some big ticket players.

Jack Conklin signs with the Browns

Jack Conklin agreed to a 3-year deal with the Browns for $42M with $30M fully guarantee, per @RosenhausSports. He earns $20mil in the first year. Wanted to keep it short due to the projected increases in the salary cap. Conklin will only be 28 when this deal expires.

Here are some the top free agents that we’re keeping an ear out for:

With each trade there are still rumors circling the block. Assumptions have been made that the Cincinnati Bengals may trade for quarterback Andy Dalton.

The Washington Redskins are still seeking  exchange for Trent Williams (OT). Williams (former number four pick overall) sat for the 2019 season and is said to be seeking $20million annually. CBS Sports’ Cody Benjamin wrote that five teams are considering the tackle including the Texans, Cardinals, Jests and Browns.