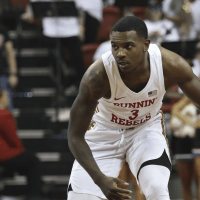 The Runnin’ Rebels will lose their second-leading scorer from the 2019-20 season as Amauri Hardy plans to graduate and transfer away from UNLV.

With Hardy gone, UNLV loses an offensive playmaker who may have struggled to consistently score, but was consistently able to break down the defense.

Without him, the Rebels have just two proven offensive playmakers in Bryce Hamilton and David Jenkins. Someone else on the roster will have prove they can create offense.

Why losing Amauri Hardy is a big blow to UNLV. pic.twitter.com/8oJ5rBoxPg

Listen to the entire episode of Technically Correct by clicking here.